Last year, Fenner Dunlop ACE was contracted to deliver an overland conveyor system for Anglo American’s Aquila project. ABHR speaks to Brendon Harms, Regional Manager of ACE Queensland to find out how the project has progressed.

The Bowen Basin Coalfield is home to dozens of coal projects, producing almost 100 per cent of Queensland’s coking coal and 60 per cent of its thermal coal.

One such project is Anglo American’s Aquila – an underground hard coking coal mine near Middlemount.

The contract, awarded in 2020, also included the mechanical and electrical installation, belt installation and commissioning. 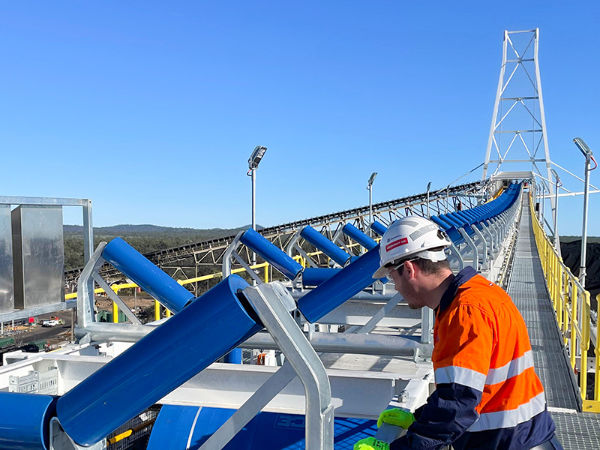 Brendon Harms, Regional Manager of ACE QLD, says the team has completed the design and supply stages of the project and is now halfway through the installation.

“The process has been a major success. We’ve been able to handle the complete project entirely in-house, which has given us both a lot of control and responsibility,” he says.

“For example, between the design and supply stages, we’ve been able to complete works in parallel to expedite the process.”

The overland conveyor will run from the underground to the surface and then move up to the stockpile. Often, the product will be put onto a stockpile outside the mine, but because the project will make use of an existing stockpile and wash plant, the conveyor will help connect the infrastructure together.

Included within the design are several custom components, such as a horizontal curve in the conveyor and an elevated stacker to load onto the stockpile.

The conveyor is a crucial piece of infrastructure for the mine, as it is the only means of extracting the coal. To ensure it operates effectively, Fenner Dunlop ACE has been through a series of stringent design reviews and quality assessments.

Harms says the complete turnkey philosophy gives Fenner the ability to handle any issue, whether they be schedule related, quality related or design related.

“Accountability is a key part of Fenner Dunlop ACE,” he says. “We take pride in building something right the first time, every time.”

“It also means that when we supply our own original equipment, the installation and maintenance team have direct access to the manuals, installation procedures and support at the touch of a button. Using multiple companies for something like this adds an additional step when it comes to logistics and communications.

“There’s also the personal satisfaction our employees can get from seeing a project go from a design drawing to a conveyor. It adds to the sense of ownership and pride we have for delivering the project.”

As part of the project, the company will provide online condition monitoring and thickness testing through Fenner’s iBelt technologies, to measure the ongoing performance of the conveyor. In addition, it will supply ongoing maintenance and associated project warranties.

Fenner Dunlop ACE’s maintenance and installation teams are made from the same pool of talent, which means future support will have intricate understanding of how the overland conveyor operates.

Ongoing maintenance will be offered through the Mackay and Emerald branches, providing belt works and servicing over the life of the project. The company’s ACE team in Mackay has expanded significantly over the past seven years to ensure it can handle large projects such as this.

Harms says Fenner Dunlop’s head to tail approach gives the client the comfort of knowing that all the components will work together as they should.

“If something does go wrong, it means that there are no arguments between multiple suppliers – we simply provide the most effective support possible to solve any problems as early as possible,” he says.

The conveyors are due to be commissioned near the end of 2021, with the project expected to be finalised in 2022.