Faced with a complex engineering challenge, Fenner Dunlop has designed, supplied and commissioned a downhill conveyor system that generates its own energy.

A coal mine in Queensland’s Central Bowen Basin had a challenge on its hands. The underground mine needed to upgrade its existing equipment to reverse the grade of its conveyors. Instead of running uphill from tail to head, all main gate conveyors would run downhill.

One of the engineering obstacles was finding a way to ensure operators could have complete control over the descending material. The four-kilometre-long conveyor is capable of handling 3500 tonnes an hour and the mine wanted to ensure it could operate under all load conditions safely and effectively.

Mark Wilcock, Branch Manager and Mechanical Engineer at Fenner Dunlop’s ACE Queensland division, led the upgrade project and has been involved in the two-year upgrade from the very beginning. He says that in the initial study stage, it was clear that the downhill angle of the conveyor was so aggressive that it would be capable of generating its own power.

“Normally, most downhill conveyors aren’t on such an aggressive slope and are therefore incapable of generating their own power. This introduced a range of additional factors to be considered, which made it a unique and challenging project for us,” he says.

“The big advantage to using VSD technology in a system like this is it provides significantly more control over the conveyor during starting and stopping scenarios.”

Wilcock says the CST system is essentially a large clutch which is slowly engaged against a motor running at 100 per cent to bring the conveyor up to speed.

“While this is fine for uphill conveyors, when going downhill and especially when starting under a regenerative load, the CST drive can’t control any of the negative power until the motor reaches full speed,” he says.

This means a complex process is required to drive through mechanical brakes until the conveyor is up to speed and any failure of these components could create a period where the conveyor belt is out of control, which can lead to serious safety issues.

By comparison, the VSD system incorporates a simple direct drive gearbox coupled to an electric motor which is speed and torque controlled through the substation and PLC control system. This control system is continually monitoring for a regenerative power condition and will automatically provide the negative power required to achieve the desired speed control during all controlled starting, running and stopping conditions. This regenerative power is fed straight back into the grid without generating any additional heat. 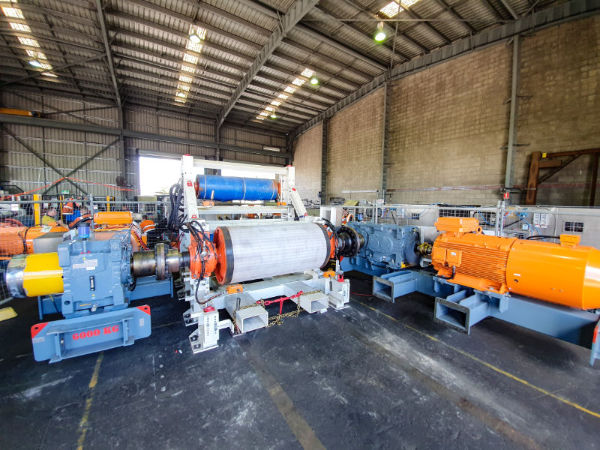 Safety was at the forefront of everything involved with the project, starting with an overarching risk assessment.

Wilcock says ACE lead the risk assessment process and pushed to have as many people from the site involved as possible, with around 20 people providing their input.

“We really want to be at the forefront of conveyor planning, so we engage with the people on site who will be responsible for the ongoing conveyor operations and maintenance as early as possible in the design process,” he says.

“All of the conveyor engineers from the site, along with several operators, fitters and electricians spent a week in total helping assess potential risks associated with the new system. We really value this involvement from the customer and strongly believe this up-front approach to risk management results in a much safer and more productive system in the long run.

Redundancy is baked into the system to ensure the failure of any one component cannot result in a hazardous situation for the mine. If the mine ever loses power, fail-safe mechanical braking stations along the conveyor activate to bring the belt to a controlled stop in a safe timeframe.

All the equipment has also undergone full load testing in the workshop before being sent to site. This involved a full 11-kilovolt power-up of the substation, regenerative load tests and dynamic brake tests. This provided the customer another level of confidence that the equipment would function as designed once in operation.

Updating to the VSD system had the added benefit of reducing the number of moving parts, helping to create a much more reliable system. Eventually, when the conveyor moves to the next area of the mine, the system can easily be reverted to an uphill conveyor system.

In addition, Fenner will provide remote monitoring support to detect any issues that may arise and deploy a team to site to resolve them as needed.

Wilcock says with the new system, Fenner can log in remotely and check on the operating parameters of the conveyor. This is particularly important in the event of a breakdown, as it allows engineers quick access to help diagnose the problem.

“A major benefit during the project was the ability for the mechanical, electrical and belting engineers to work so closely together. Being a one-stop shop for the complete conveyor system allows an in depth understanding of how all components interact, resulting in the most efficient conveyor system possible,” he says.

“Fenner takes pride in the conveyors we deliver, and we want to provide confidence to the customer that our service continues well beyond the delivery of the equipment to site. We offer a complete solution encompassing design, supply, commissioning, installation and maintenance services.”

“When we supply a complete solution, we know how all the parts interact, creating a cost effective, efficient, and inherently safe system. For our customers, we are one point of contact – we do it all.”